This post is specifically for adults, all trivia questions for adults, containing questions about different categories, include IT, English, history, movies, entertainment, some questions are related to Australia and United Kingdom. Some pop culture quiz questions are also included. 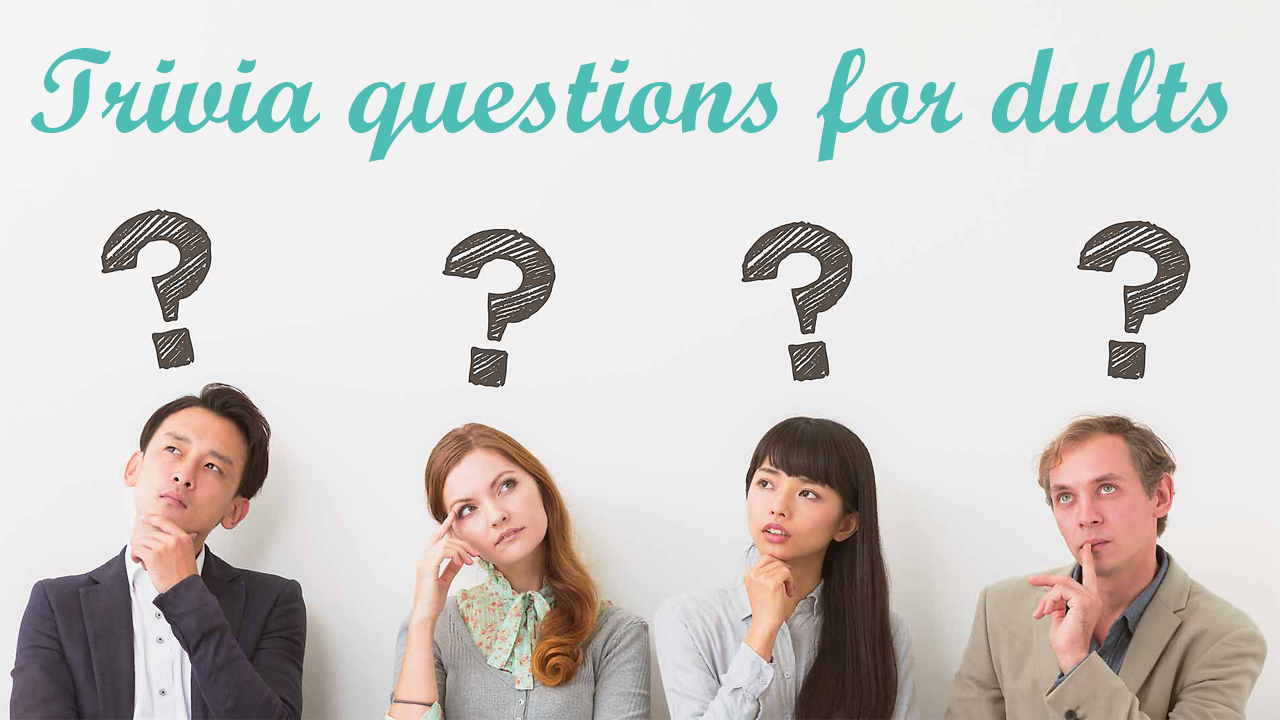 1. Hamlet, The Merchant of Venice, and Taming of Shrew are the famous novels of who?

2. In Shakespeare famous comedy twelfth night, what was the relationship between Sebastian and Viola?

Show Answer
Viola was Sebastian sister, and Sebastian was her brother

3. Michelle Obama is the wife of who?

4. Microsoft founded on which date?

5. First dollar coin made on which date?

8. How many times the famous footballer Cristiano Ronaldo won the best player award?

9. In which year first calendar was made?

10. The author J.K Rowling famous for which movie series?

11. LCM in mathematics stands for what?

12. Which American president appeared on the show “Laugh-in”?

13. The world longest running TV show is what?

15. “Keep calm and carry on” is the slogan of which nation?

16. Panther is another name of what?

18. The Australian flag has how many stars?

19. Which element present on 14th number in the periodic table?

20. Approximately how many time a smartphone user touch their screen per day?

21. Bible contains how many books?

22. True or false: Anny Nightingale was the first female DJ on the radio?

24. First nuclear test of China conducted on which date?

26. “I’ll be back” is the famous saying of which famous actor?

27. “When you got nothing, you have nothing to lose” is the famous dialogue of which movie?

28. The famous song “This is what you come for” was released in which year?

29. Approximately how many movies Angelina Julie has directed?

30. The famous movie “The Hustler” release on which year?

31. “Playing for keeps” movie directed by who?

33. Chernobyl disaster happened on which date?

34. First President of Canada was?

35. “Simpson desert” found in which continent?

36. In 1896 the war between Zanzibar and England last for how many minutes?

Show Answer
Only 38 minutes. Zanzibar surrendered after 38 minutes of war

37. Which is the only food that has no expiry date?

39. The world oldest still use a currency is what?

40. Who got the title of king of comedy?

41. David Lloyd George got what nickname?

42. What is the task of insulin in the human body?

43. The Japanese word “Sayonara” means what?

44. The kodek camera invented by who?

45. Colin Dexter the crime writer famous for writing the Inspector Morse series, died on which date?

46. Which famous musician died in October 2017, who played for Heartbreakers and Travelling Wilburys?

47. Zimbabwean president Robert Mugabe resigned on which date, after 37 years of rule?

48. On which date America officially recognize Jerusalem as Israel’s capital?

49. The British economist Sir Tony Atkinson died on which date? It might be possible that you feel that you are stuck for questions to ask then in this situation you have to select the entertaining easy trivia questions for adults to host a trivia night.

These adult trivia questions will make the night enjoyable for every member of the group so you always have the epic trivia quiz night.

50. In 2000 summer Olympics which Australian women won the Olympic champion in 400 meters?

51. The famous comedian and film producer Sacha Baron Cohen married with which actress?

53. The famous Australian actor Hugh Jackman was born in which city?

Are you a football lover? try this 105+ Soccer trivia questions with answers

55. From which movie Daniel Craig made his debut as James Bond in 2006?

56. The famous Celebrity couple Brad Pit and Angelina Jolie separated in which year?

58. In which war the British use concentration camps?

59. Union Jack is a national flag of which country?

60. In which year England won the football world cup?

61. Scotland is a continent or Kingdom?

Do you like funny questions? try this 109+ fun trivia questions everyone should know

62. The first women Prime Minister of UK was?

63. Magna Carta signed on which year?